Recently, Firefox has been maxing out my CPU “when I have more than three tabs open.” As is typical with bug reports from users, this one is very poorly worded and essentially useless. It turns out that that was not a good explanation of what was going on. I messed around a little more and figured out that the problem had these characteristics: 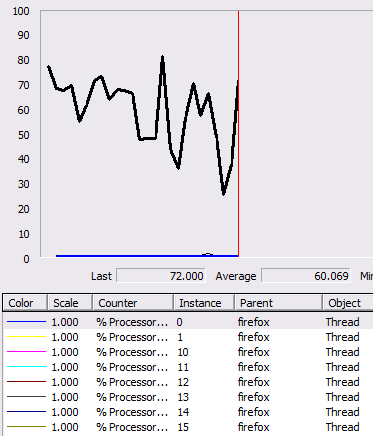 I’m not sure if this is some strange interaction of my specific combination of extensions and settings, or if this happens for all Firefox users. This seems like a possible security vulnerability, but I can’t say one way or the other.

I suppose I could have downloaded and compiled the source code for Firefox to figure things out, but that was way more effort than I felt like giving. I did managed to debug and fix this issue for myself—without source or symbols—which I think makes for an interesting writeup.

Since the problem was on every page on the website, and continued after the page finished loading, I assumed it had to be a javascript or Flash problem (both of which are abused by ESPN to an irritating degree). I don’t even have the Flash plugin for Firefox installed, so that narrowed the scope of my investigation.

The first thing I did was try to debug the Javascript normally; this was hampered by several factors:

To summarize the story to this point, I had a (likely) javascript problem on a page I visit very frequently, coupled with a browser bug that maxed the CPU and made the issue difficult to diagnose through normal means.

I attached to Firefox.exe in Windbg and started randomly breaking in and checking on thread zero while the spike was in progress. Sometimes, frames in the js3250 module were on the stack:

The information for js3250 confirms (if the module name and the names of the export functions weren’t enough for you) that it is the Mozilla Javascript implementation.

All of this is reasonably good evidence that javascript is the right place to start. I took a look at the exports for js3250 (x js3250!* in Windbg) — it appeared as though this module was implemented as a few dozen C-style exports.

I thought that a logical thing to look for was an “execute a javascript function” function of some kind, and there were a few exports named some variation of “Call function.”

I set a breakpoint on all of these.

After resuming the program, I started hitting these breakpoints constantly. I did a sanity check and made sure that this didn’t occur on a cleaner site (google), and this was the case. I didn’t have any immediate success figuring out what script functions were being called. You can dig up the source for these API’s if you like, but I’m guessing that the script is already processed into different data structures by the time the javascript engine gets here.

I looked at some of the stacks when these functions were called, and I noticed this pretty far down:

I hoped this would lead me to some bits of javascript pointed to from nearby locations on the stack, so I set a breakpoint there. When it was hit, I started dumping out strings (using “dda @esp” and and “ddu @esp”) and found this:

As an only slightly educated guess, I used the Adblock extension to block this script. 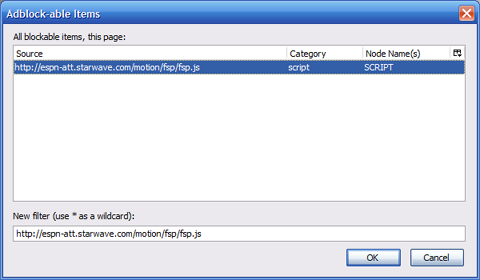 After reloading the page, the problem was gone! There don’t seem to be any site-breaking problems associated with turning this script off. This is all or part of the “ESPN Motion” business that tries to display sound and video on the site. Hey, ESPN: this is a terrible idea in the first place. Your website shouldn’t start yelling at me when I visit it. It’s no excuse for Firefox to A/V, but I thought everyone with a three-digit IQ stopped doing this in 1996.